THURSDAY 21st: A bright day with a mixture of sunshine and occasional showers, these still wintry at times over Shetland. A less-cold day, but not feeling so, as W to NW’ly winds increase - F6-7 and locally gale F8.   Sea state – Overnight increasing rough, with a 3 to 4 metre NW’ly wind-swell. Later increasing very rough, with a 4 to 5 metre NW’ly wind-swell, and perhaps 6 metres around the north of Shetland. Maximum temperature 8 °C.

Spent Monday out on the rocks beyond Hamnavoe, battling against high wind and drifting rain and spray whilst trying to paint the magnificent turquoise-filled waves rolling in and breaking on the rocks beneath me before retreating to the studio to dry out and drink tea. I felt completely overwhelmed by the sight of these huge waves – impossible to capture their impact (and to paint in such conditions). The resulting paintings and photographs simply do not do justice to the experience. Returning to the same place late afternoon the following day, although less dramatic, found a spot down low to the water, and managed to do some drawing as I huddled against rocks trying to keep out of the numbing wind. I didn’t last long before my hands were so cold they hurt. 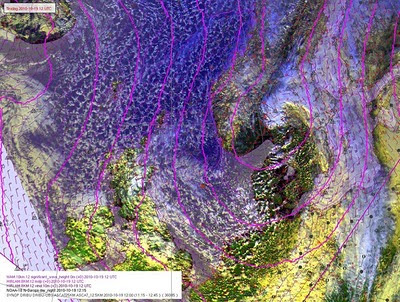 ....and an explanation: the pink lines are lines of equal atmospheric air pressure. Deepest air pressure is about over Oslo. Arrows are showing wind speed. Some observations are also included (black circles, with numbers around). The colours are added: dark blue over ocean with clear sky above, but shaded where there are clouds; land is green, also shaded when there are clouds. Colours in clouds are coded so that yellow is low cloud. The air to the left of the low centre is typically cold with dots (showers).

Weather certainly predominates here; talking to the archivists in the museum, many of the old diaries they are transcribing, daily record the weather.

During the last few days (when not talking to fishermen and photographing their hands, or watching the sea), I have been working in the studio on a couple of paintings that are about the colour and the movement of the sea. They are ‘in-progress’ and I am not sure how they will resolve themselves. 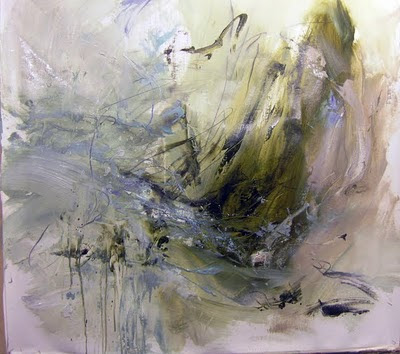 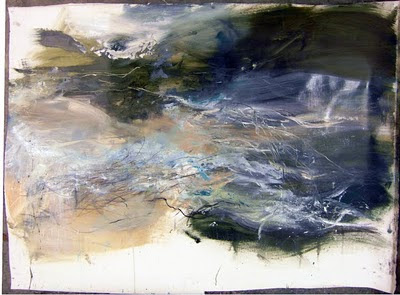 ...and drawings to go with them

It is so frustrating trying to paint the experience of what is there before me because it’s more than sight – it’s the whole thing - noise filling the air, taste and smell of salt, the movement, being buffeted, the light - the rain coming and going, freezing air, freezing fingers; I find myself swaying with the waves, even talking to the sea. (It’s okay I’m not going mad. And yes Anne Karin I will be careful on those rocks).

This morning there was snow lying in patches on the ground, and the ‘sea state’ is definitely getting rougher. The sound of the wind is relentless. Having booked my passage on the Good Shepherd IV to Fair Isle for next Tuesday, in order to experience the sea crossing – where two seas meet - I am wondering if I’ll actually get there – and more to the point, get back.

Observations from The Booth:

- solitary seal that frequents the neighbourhood, catching a large fish, then in annoyance at the mobbing gulls, launching its body out of the water

– grey-hooded crow, beak-full of mussel, landing on the slope beside the Booth; laying it on the grass before making a hole in the bank, then carefully placing the mussel inside, picking and tucking in a small switch of dry grass to cover the hiding place before flying off

- heron flying across the harbour, turning in a slow arc just outside the windows of the Booth
at October 21, 2010 2 comments:

Is selecting a photograph and imbedding it into a painting ‘too easy’ an option? Do these images become ‘mere’ ‘illustrations’? Does using archival photographic images and historical texts in an artwork convey/suggest narrative that would not otherwise be there? Does it add or amplify an idea or narrative?
Where does it take the viewer? Does it lead to speculation about the relationship between image and artist? Between image and place? Between time – the flow between then and now?
I think that I am trying to imbed my own memories, feelings, experiences of the sea with my growing awareness of the Shetlanders’ own deep relationship with and dependency upon the sea – frailty, courage, stoicism, foolishness – our attempts to understand and control something beyond our control.

How do my paintings/drawings inform the viewer? Some of the images I have been making work better than others. Concentrating upon a single object is perhaps more effective than combining several. The image of the Oskerry an essential bailing tool to a fisherman in the middle of a heaving ocean, is the simplest, and perhaps a more powerful and evocative motif. 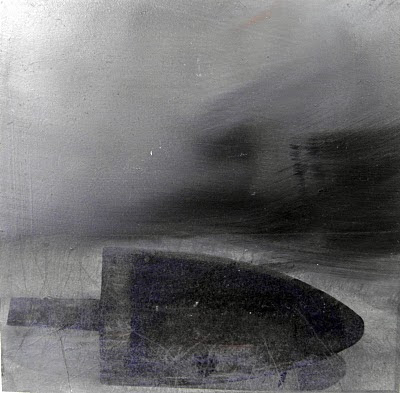 The image of a bandaged hand (see last posting), that I discovered in one of the Archive photographs brings questions, suggests narratives, directly referencing the dangers of work on the sea.

Engaged not only in walking the Shetland coastline and making drawings and paintings, working from historical research in the Shetland Archives, museums, and meeting/talking to people living on Shetland, who know the place intimately, fishermen and boat-buliders, story-tellers, artists, historians and so on, impacts upon my work. Reading first-hand accounts by survivors of 19thC fishing community disasters evoke rich imagery. The Norwegian angle - the work of the Oceanographers to understand the sea is another aspect of the project; it has been suggested to me that these are two separate aspects of the project, yet I see them as intertwined – just as Nordic culture and language is in evidence on Shetland, their histories are also linked by a shared stretch of sea.

Collecting these stories, accounts of disasters, images from the 19th century, and placing these within the context of my own work is a form of being ‘polyvocal’ (the telling of the situation from a variety of perspectives; use of multiple voices as a narrative mode within a text/image). Perhaps it acknowledges that there is no single definitive answer or image; the paintings and drawings become environments of social-sharing; participants are not just observers or readers, but become instead co-creators or interpreters of content. 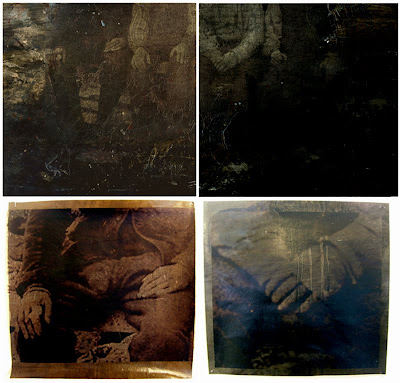 ‘I struck my knuckle on a thorle pin and mis-shaped to this day’.
‘Sail was made with the skipper getting on one mitton, the other hand which held the sheet was badly cut and chafed’. (1881 Gloup Disaster)

Having started to make some work about hands, and collecting images of 19thC fishermen's hands and finding damaged hands, I have been pestering the local fishermen to show me their hands and allow me to photograph them. They have all been tolerant and compliant, and probably bemused at such a request. As a result of being introduced to a retired fisherman and his family, I spent an interesting Friday evening talking with David Smith who started work on the boats aged 15. Each evening after a day out fishing they would have to soak their hands into scalding hot water and Dettol. The water would be made as hot as possible so they would be taking their hands in and out as they acclimatised to the heat (and pain), as they tried to leave them in for as long as possible to draw out the poisons from the fish that might have got into cuts and scrapes in their skin. There would be a period in the summer months when their hands would go very red and sore, due possibly to algae eaten by fish.

Out painting today with Deb and Wilma at the Stead of Culswick with two seals to keep us company. Gale force 8's 'no so bad' - exhilarating and inspiring. Lots of spray and waves breaking far out to sea. Thank you Deb & Wilma for putting up with my strange 'soothmooth' predilection for such weather and taking me out despite it, and to Wilma for the warming soup and fruit crumble afterwards.

Back at The Booth tonight, having rung out my waterproofs and cooked my supper, the wind sounds wild, thwacking against the side of the studio and whipping up the surface of the water in the harbour. It's gonna be a rough night.
at October 17, 2010 No comments: