Spent the morning back up in the dusty archives of the Met Institute. Managed – finally – to track down some maps for 1900 the year of the Shetland Delting Disaster.

So here we have maps showing the preceding day and the actual day. It is clear that there are strong S Westerly winds approaching… and I need to ask my meteorological friends for a closer reading than I can provide.  I can certainly make out the tell tale signs that there are strong winds and that there is an occluded front (not sure I've spelt that correctly, and only recently knew that it means a mixed front - really need some more meteorological lessons)


But the information on the map is only as good as the observations that were then being made… and without the system of observation and equipment that is now used, maybe it’s understandable that the warnings of impending storms did not always reach those whose lives hung in the balance.


Of course on the day of the 1881 Gloup Disaster there was no warnings at all and the newspapers after the loss of life criticised the British Government for not maintaining the telegraphic communication line, which had been allowed to deteriorate. Sadly I can find no information for this date.

Treasures in the Meteorological Institute


Thanks to Birgitte I have discovered a treasure trove on the third floor of the Meteorological Institute – rooms full of old records of meteorological observations dating back to 1800’s – spent a happy afternoon delving into dusty brown paper packages (all tied up with string), and browsing amongst the shelves, boxes, and drawers full of old maps showing wind/current directions for various parts of the sea, books containing daily/monthly records of weather observations by the American and London Met Offices. 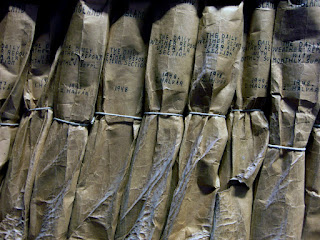 A lot of the records are written in German, the language used until the end of the occupation of Norway, but there is also English and French as well as Norwegian.

I spent a long time trying to track down weather reports that cover the July 20th 1881 Gloup Disaster and the December 21st 1900 Delting Disaster in Shetland. Mysteriously the records seem to go up to 1880 and then stop, to then resume in 1906… so what happened in between..? Is this a conspiracy? 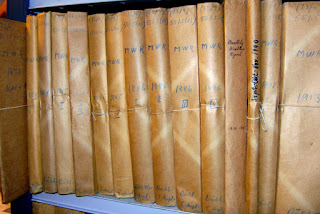 Am going back tomorrow to see if there is a similar map for September 2nd 1897 – the date of a disaster on Fair Isle. 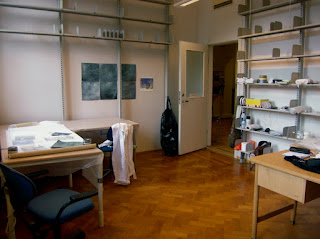 So finally... we are allowed into the Meteorological Institute building (we are not strike-breaking), and here is my studio space - set up and ready to go... clean white overalls at the ready... now I have to do some work. Expectations weighing heavily upon me.. there are people checking..

So... I'm now back in Norway, currently in Bergen awaiting the opportunity to take up residence in a studio space in the Meteorological Institute and make work responding to their work studying the movement of sea and extreme waves.

However, since everyone appears to be on strike, this is a little tricky (!), so I've attended the strike meeting in Bergen - CLEVER PEOPLE COST! - and now I'm whiling away the time sitting watching the constant flow of boats going by from the balcony of Ann Karin's home - I have a magnificent view across the estuary from one bridge to another, the water sparkling in the sun - the surface constantly changing and seeming to ripple and flow all ways at once.

Yesterday afternoon was spent at the beautiful Coastal Museum in Øygarden, an island west of Bergen, with Ann Karin Magnasson and Johannes Guddell, to meet its Director, BJØRG CHRISTOPHERSEN (thank you Ann Karin for organising this), and discussing my project and the possibility of exhibiting and presenting work (while eating delicious pancakes with sour cream and jam, and drinking coffee!). 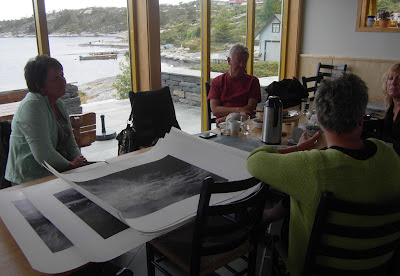 Perched on the old steamship pier facing the sea, the museum focusses upon the relationships between culture and nature - how people have worked with natural resources in a coastal area for the last 10,000 years,  and displaying artifacts from its strong maritime heritage. http://www.kystmuseet.com 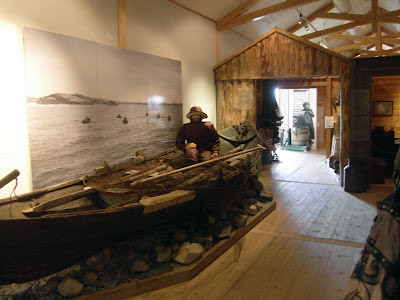 Thank you to the Arts Council for awarding me further funding for this project.