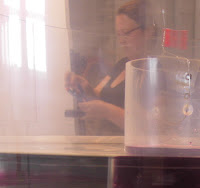 Dr Mirjam Glessmer, currently working at the Geophysical Institute, University of Bergen, invited me to watch her demonstrating the interaction of sea water and fresh water when subjected to centrifugal forces.

So... we have salt water dyed magenta held in an upside down flask in the centre of a tank filled with fresh tap water.

The circular tank revolves and the flask is removed....the denser salt water, held by the fresh water, and due to the centrifugal forces, initially looks a bit like a fried egg with a darker central yolk, and with two additional small outlying eddies.....
a column with a sloping front develop in the rotating system, and begins to form a dome,

When the revolving tank is stopped magenta-dyed salt water billows out evenly across the tank, slowly mixing with the freshwater. 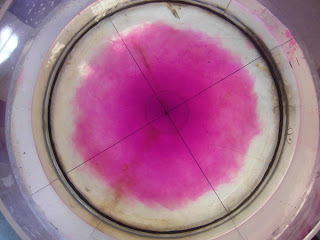 
Staying at Ann Karin's house, overlooking the sea at the entrance to Bergen between the Askøy and Sotra suspension bridges, I spent a lot of time watching the sea traffic - small speed boats, sail boats, vast cruise ships, tug boats, containers and reefers, even the occasional rowboat - passing by, and the ever-changing surface of the sea flowing back and forth, waves and ripples spreading out from the boats. But even when vessels were not passing there were times when we could see areas where the surface of the water was disturbed - a sort of agitated flurry on the surface, and flow lines  - and these were probably caused by fresh water flowing off the land into the sea and the interaction between them. 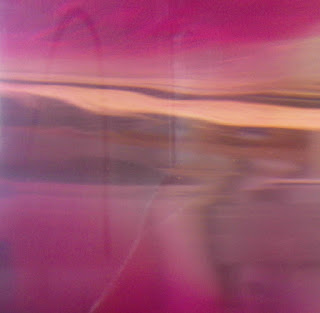