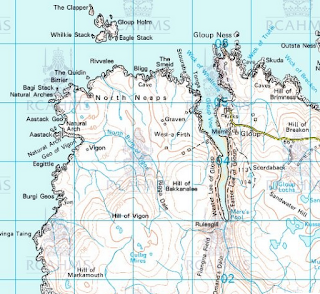 Weather: Staying mostly cloudy across Shetland with the chance of some occasionally heavy rain. F3-4 SE’ly winds. A risk of southeasterly gales for Shetland.
Sea State: Moderate to rough, with a 2 to 3 metre S to SW’ly wind-swell. 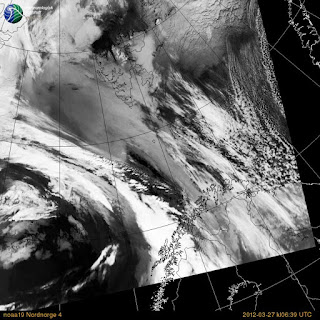 Having traveled up to Toft to catch the ferry to Yell, and then driven the length of the island I arrive at Gloup, once the second most important haaf station in Shetland. Carrying my rucksack full of drawing materials and paints I follow the path down to the Voe. No-one else around.

Choose a stone. Any stone? Grey, brown, orange, pale, dark, striped, pattered, translucent, opaque. How to choose? I pick up one up – black and white markings, tiny specks of burnt orange. Nothing particular about its shape, palm-sized. I slip it into my pocket. 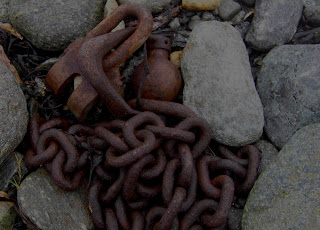 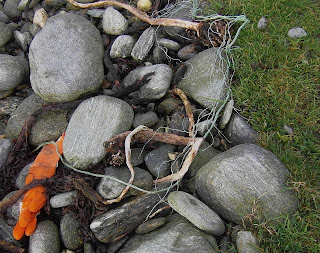 Walking along the beach, head down looking for treasures, I find an old rusting chain and ball – how old? - Bits of coloured plastic twine, rubber gloves, broken shell and stone. There's a strong smell of seaweed. The seaweed seems to have separated itself into colour bands – red strips nearest the water’s edge, darker brown/black bands behind - each to its own, the occasional vivid pink strand amongst the rest; the result of different tides.

Pausing I look up and am confronted by the open sea stretching out to the horizon, between the protective arms of the two hillsides, jagged rocks at the entrance to the voe. It’s pretty calm here at the moment, although gales have been predicted. 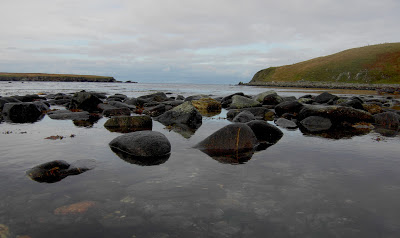 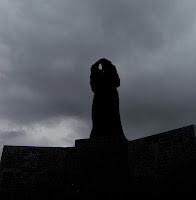 Difficult to picture this as the site of a terrible tragedy. On 21st July 1881, fishermen set sail in their thirty-foot open boats, each crewed by six men, and rowed to the fishing grounds thirty or forty miles offshore. Fifty-eight men lost their lives in an unexpected summer storm that swept in from Iceland, leaving behind eighty-five children and 34 widows. But I have been here on much wilder days, so know how strong the winds can be. Behind me on the hillside stands a monument constantly scanning the sea, clasping her child in her arms – a monument to the loss of lives, the long list of the names of fishermen and boats inscribed below.

Water flows, hitting the far bank. There’s that seal. On the near shore weed floats gently on the surface, rising with the slight swell. I crouch down and stare into the depths, the water is incredibly clear – pale stone, shell and weed below. Small bubbles rise, then stop. I peer in to find the source but I can’t see what’s down there. The seal watches.

Small ripples fan out towards the shore, there’s a swell running through. Further out the sea reflects small patches of pale blue, green from the hills. I disturb small birds that have been sitting unseen amongst rocks and weed and they set off hurriedly flying out across the water, calling. The sun emerges briefly, clouds breaking up, the sky growing lighter.  It’s very peaceful, just the sound of the sea and occasional sea bird and muttering crow. Not sure what to draw, it’s too still and bland for me. I look back up the voe and hills where a dark mass of cloud is gathering, and draw them.
Piles of stone heaped in lines on the grass bank above the shore. I stand puzzling. Was this where noosts lay and the sixareens were drawn up out of the sea? When I walk further up the hill and look back I can see, half submerged in the sea, that there are also lines of stone and indentations in the shore – maybe these were the noosts. Across on the far headland are the ruins of seven crofts, maybe more. Did the families of the fishermen live there? To get to them without a boat I’d have to walk a long way inland along the voe before I could cross. On my side of the voe there are stone walls, maybe the remains of a structure or enclosures - difficult to tell as the stones are so dispersed. 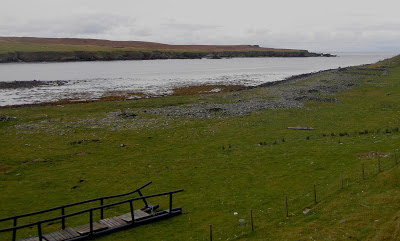 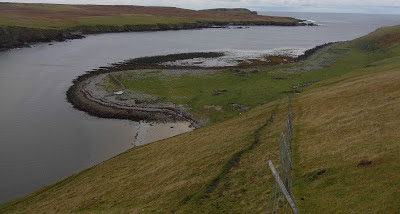 Grey sky now. A few drops of cold rain fall. I turn and work my way around the coast towards the sea - a good beach of rounded stones, ideal for drying and salting fish.
I leave to catch the ferry back to the mainland just before the rain sets in properly.
I make two more drawings during the twenty-minute crossing back to the mainland, and am much happier with these two rapid drawings than the one I made at Gloup.
I remember a tutor remarking to me in the middle of a life drawing session that if I continue to draw so fast what will I do with the rest of my life… the answer is - make more drawings…