FRIDAY 2nd November: A rather cloudy day with some showers; brighter spells between. Orkney and Fair Isle becoming drier and brighter as occasionally heavy showers clear north to affect the rest of Shetland this afternoon. F4 SE’ly winds, easing for a time then becoming a f4-5 W’ly later. Breezy with showers clearing to leave a mainly dry night with clear spells and lighter winds.
Sea State: Moderate or rough, with a 2 to 3 metre SE’ly wind-swell turning W’ly 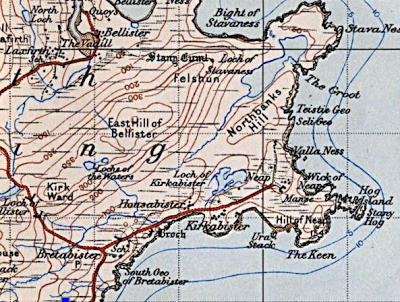 Latitude 60.302268N, Longitude 1.113426W
HU 49 58
Not at all sure that I’m in the right place, but it looks pretty good. The Haaf Fishing stations map suggests that it’s around here somewhere… and looking along the stretch of coast the rest of it is pretty rocky and not suitable for launching boats or landing the catch.
A small beach with good sized smooth stones (one of the requisites for drying fish), a slightly sheltered bay, although today the sea is pretty big, with some very large waves rolling in and crashing high on the rocks, and you really wouldn’t want to be setting off in a boat right now.

According to Marine List: in November 1793, the sloop Mally and Catherine, traveling from Liverpool to Shetland with fishing salt, was wrecked in this bay. On 18 December 1847, The Humber, of Hull (classified as a barquentine), was stranded at ‘Howabister’, Nesting... 'It broke up soon after she struck. Of the cargo, the crew of 6 saved about 20 bales of raw cotton and 1 bale of cotton goods; the rest was excessively plundered'.

This is a narrow beach, remarkably free from the usual debris; there’s no sign of noosts, but maybe the boats were dragged up onto the grass bank behind.  Nor are there any remains of a Böd, but there are ruins of buildings in the fields; somewhere behind me is the site of an iron age Broch and burial mound. 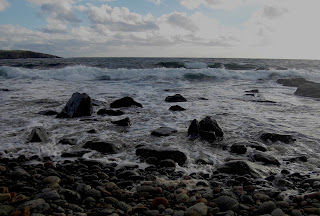 The sound of stones being dragged, overturning as they are sucked back and forth. Far out large waves break over just visible rocks. The landmass in the far distance is Foula. I’d thought it quite a calm day so am surprised at how high and agitated the sea is today, an undulating surface of peaks – a big swell. Waves break aquamarine under blue sky and bright sun, large puffy cumulus clouds mustering, and a cold relentless wind blowing directly off the sea. I’m not sure how long the sun will last.

I’m not sure whether the tide is going out or coming in, so feel slightly anxious. Watching the waves advancing and noting the tidal mark of seaweed, I think I’m safe enough. The seal has arrived - I knew it would find me - swimming close to the shore, watching. Seabirds fly over. 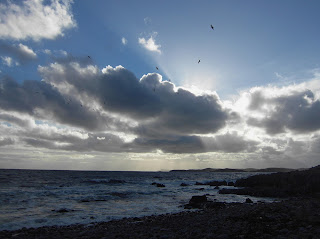 The sun retreats behind the now dark mass of cloud, rays stretching into the sea. I think the tide is coming in so I also retreat back up the beach and start painting.

The seal disappears. Rain sets in. 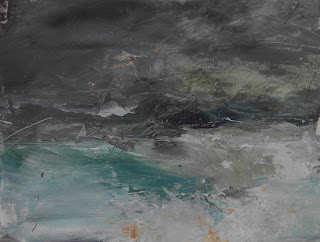 An orange piece of plastic, being tossed about quite a long way out, arrives on the shore, together with a long piece of driftwood. In a tree-less place, such bounty was once integral to house building on Shetland. (I’m told that the wooden floor in my small house came from a wrecked Norwegian trawler - nice to know there's a something from the sea in the house).

I’ve been here painting and drawing for some time and the incoming tide has made some headway up the beach towards me. The wind is quite strong, the light changes constantly as clouds move across the sky.
A dark cloud mass overhead; the sea, still pounding, with small pauses while it catches its breath, now a deep green/inky-black. 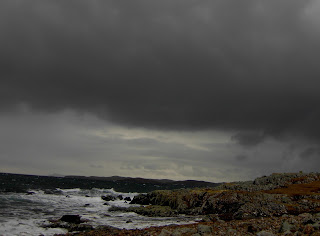 More rain sweeps in, cold and hard. I wait. My face is freezing, the wind becoming stronger.  I think it might be time to go. Hot coffee beckons.
(to be added - image of water sample and findings from the beach)