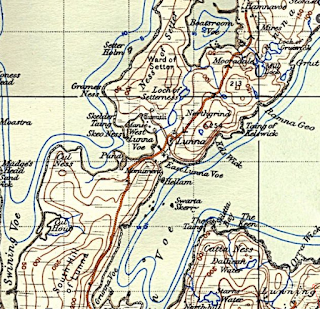 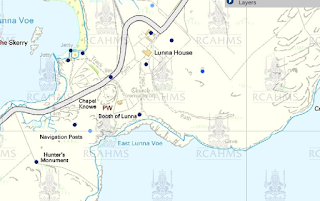 A flock of small diving birds are sitting in the bay when I arrive. Parking by the church and through the gate down to the sea, the seal is also there before me. No wind today, a clouded sky, uniformly grey, an undulating surface of small rippling waves washing onto the shore, grey/green almost silver.  Peat-coloured hills surround the voe, dotted with a few white-washed houses. Round the corner is the open sea.  I’m told that this is otter country, so maybe I’ll be lucky. 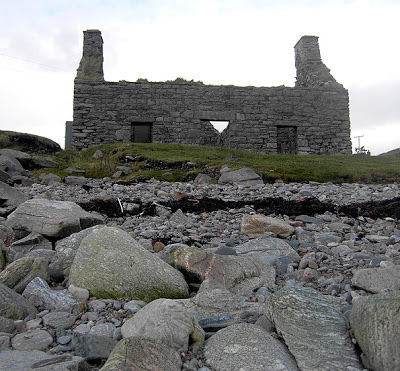 The ruins of a stone Böd stand on the grass banks. Low doorways leading to a couple of small rooms; two storeys, a stone staircase on the outside, leading to the station manger’s office. This was once a store-house for bales of dried and salted Ling, laid out and 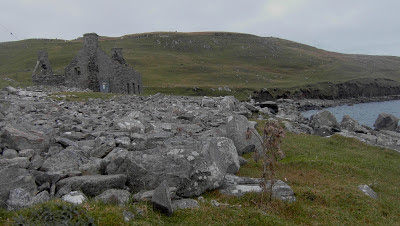 dried on the stone strewn platform that lies just beyond – grey, pink and red - some a mixture of both, small stones with larger ones on the sea-side; a drying beach built by hand and out of reach of the sea.

Large rocks on the narrow beach are black with pink stripes running through them. A small noisy Shetland wren perches on top of one, and a tiny brown bird (a Rock Bunting?), is hopping in and out of the rocks behind me, making a sort of tutting noise – a bit like tiny stones being knocked together. A line of seaweed high on the shoreline; so the tide rises to to nearly touch the grass bank.

I sit on the beach painting. There’s a walker on the hill  - first person I’ve seen around.

Seaweed floating, pushed back and forth, not yet ready to come into shore.

A creel boat arrives, cutting across the water to reach orange buoys marking his nets. An orange survival-suited figure pulling in the creels, arms raised as rejects fly out from the boat – too small for the catch. I can hear his radio – permanently tuned to the weather – “gale-force southerly, south-westerly, showers later”, but not yet... Catching sight of me he waves and heads off. 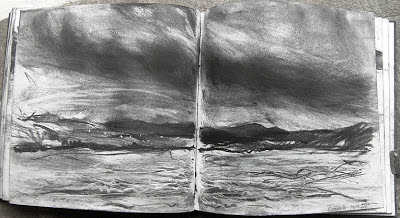 Packing up, I collect my water sample, and take a walk along the cliffs above the sea. I'll get to the highest point, but there is always another beyond. Carnage beneath my feet; this is the place where sea urchins and crabs meet their death, broken shells smashed by eager gulls, along with discarded crab legs litter the banks. 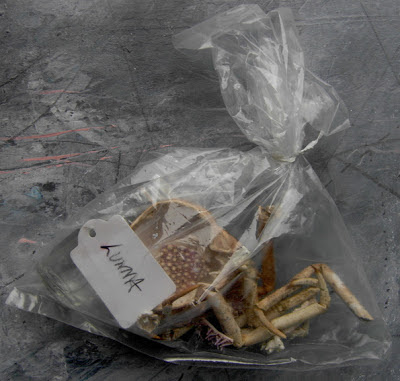 I climb to a pile of large stones, sit and look out across the voe. It’s still very calm, a slight wind ruffling the surface, light beginning to fade. A peaceful place to spend a day. Hlunneid (Old Norse): isthmus where boats were drawn up on 'linns' (skids)