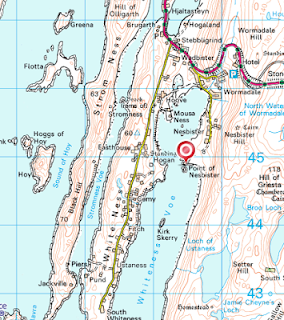 Late afternoon. It’s become dark since I arrived, which was rather late in the afternoon…. Driving down a narrow rutted road, through two farm gates – geese protesting as I hustle them out of the way – then out of the car, paints, boards, sketchbook and charcoal pushed into my rucksack, with rags, bottle of turpentine, and palette knives. Climbing over the barbed wire fence, I follow traces of a stone track slowly disappearing under grass and weeds, dodging swampy bits and jumping channels full of water, past a jumble of tumbling-down stone walls, until I’m standing on a beach stretching the length of Whiteness Voe, a long sweeping bay. 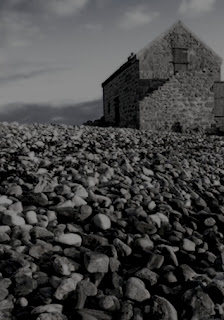 The Böd stands silhouetted against the sky; thick stone walls, small high windows, and wooden door solid against the weather. Perched on a rocky outcrop at the end of a stone strewn causeway separating open sea from voe behind, water is washing up to roughly hewn stone slab steps that rise from the beach to the entrance. To the rear, another set climb to an upper floor. 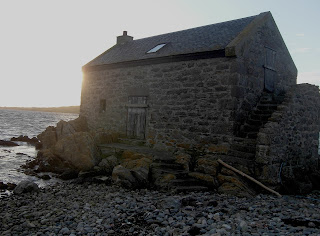 Peering inside, the interior is dark and dusty, a rough stone floor, a wooden table and chairs, a fire heath, and sleeping bench. With a stand-pipe and rudimentary outside toilet, it’s now used as a camping Böd, which presumably has saved it from becoming a ruin. Built in 1844, and once owned by Hay & Co., fish dried along the beach were stored in the Böd before being exported. 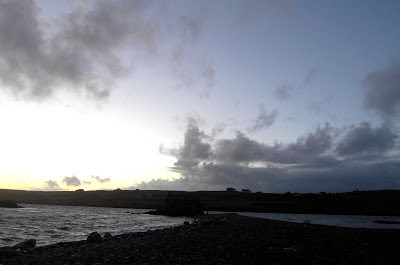 Standing here the sound of the sea and the wind fills my head. What's it like to be here in a stormy weather? At such times it must be cut off from the beach, waves hitting the stone sides and sweeping over the peninsula.

The causeway separates an inner area of water from the waves, and a strangely calm pool lies directly behind the Böd, disturbed only by the wind rippling the surface. Seagulls drift across its surface. 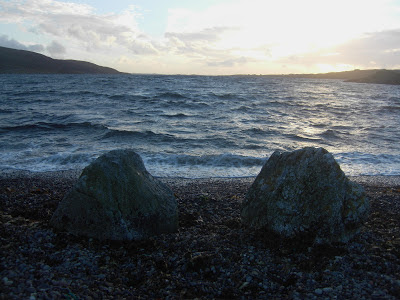 I walk to edge of the sea. Pairs of large rounded stones sit close to the shore; nestling together, a place to set the boats drawn up from the sea.  There are such noosts all along this coastline. 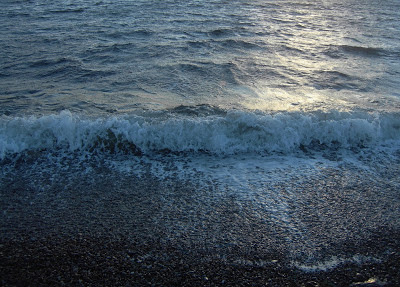 A cold strong wind sweeps in directly from the sea, masses of small waves flow towards me in a sea of steel grey-blue, breaking green. There’s not much shelter close to the water’s edge. 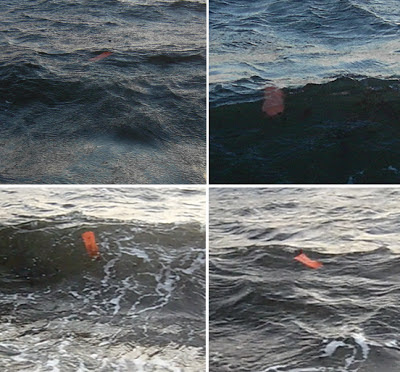 An orange rubber glove floating in the sea, rising and falling. Sometimes it waves before sinking again. It’s the kind that the fishermen wear. I wait for it to arrive on the shore, but it never makes it. There are strands of plastic string lying tangled in the seaweed; they are all the colours of the sea. I collect as many different colours as I can find and place them with my bottle containing the seawater sample.

Earlier there was a yellow-orange-streaked sky. The sun starts to sink as I start to paint; I don’t have much time before it gets dark. 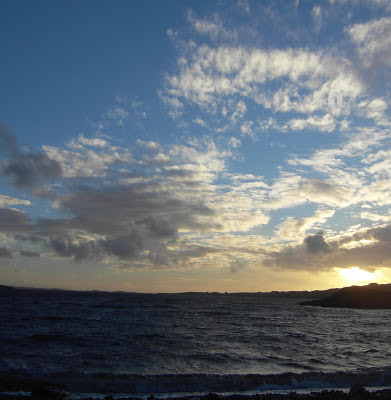 The sky is wonderful; red streaks, dark clouds and dark hills beneath. I watch the waves.

Concentrating so hard on my paintings I only see the dogs bounding towards me when I hear the shout of their owners, a couple – him in a deer stalker hat – out for their evening constitution. The only thing I’m worried about is my wet boards of oil paint, but the hounds turn back before they reach me. I raise an arm in acknowledgement; they - both dogs and owners - must be bemused to find a figure lurking in semi-darkness alone on the beach. (What does a bemused dog look like?).

I now can’t see what I’m painting; am not even sure what colours I’m using. I pack up before it becomes so dark I can’t see the way back, and, heaving rucksack onto my back, struggle back to the car against the wind. Once inside I sit enjoying the silence and calm.