The Arctic Circle and beyond 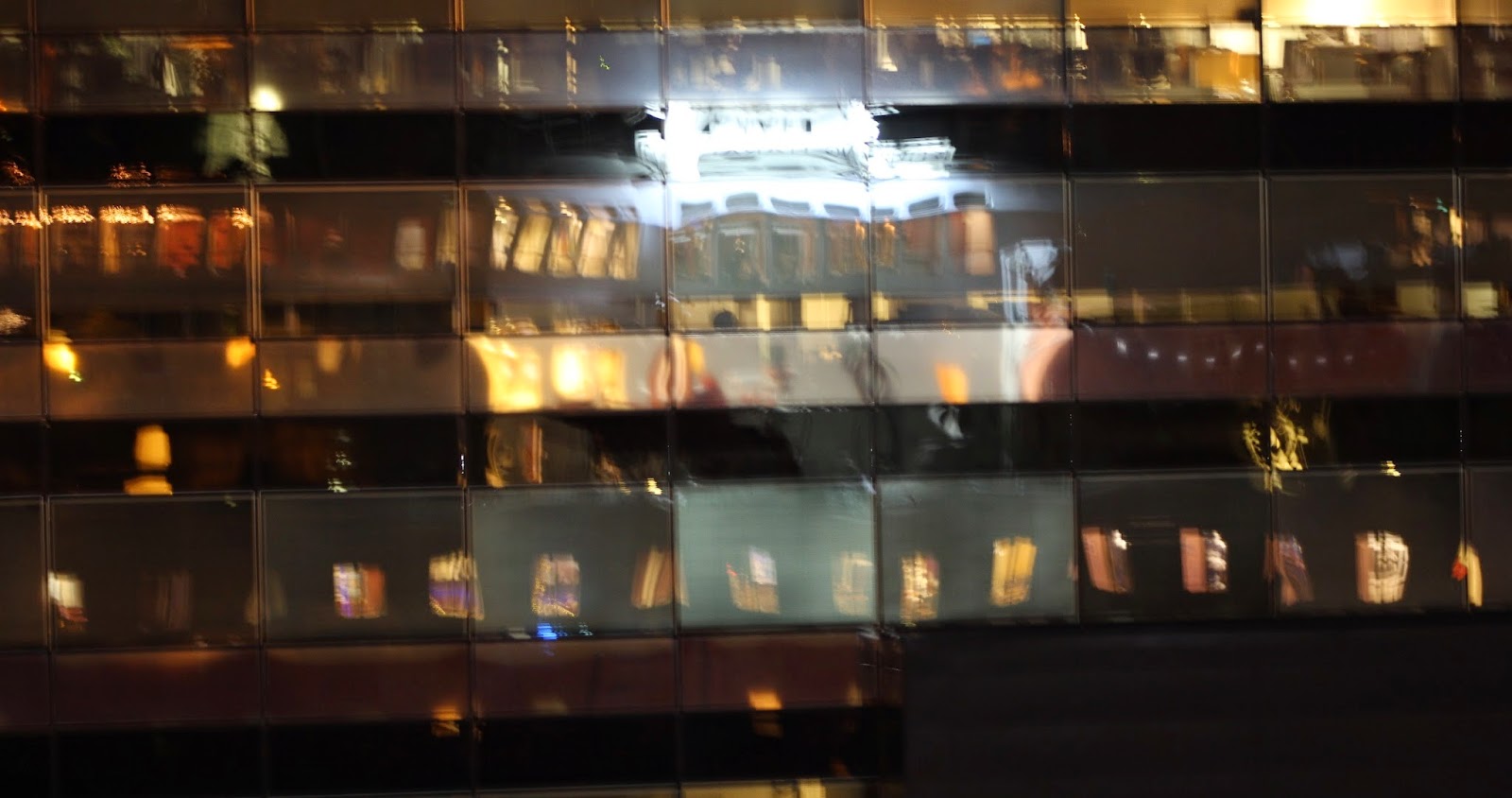 10pm A completely calm sea under a black starless sky. Small ripples travel across the surface of a black sea; reflected lights from the harbour and hill beyond - an orange glow of twinkling lights. The streets around the harbour seem deserted. Sound of the ship’s engine. Further scrutiny of the sky reveals a few stars; the lights of Bergen screen out most. I can see my breath in the cold air.
10.45pm Water froths steadily at the ship’s helm, ripples fanning across the harbour reach to the far shores. A cold wind is blowing, bright harbour lights recede, and a thin veil of mist is illuminated hanging in the air against the mountains behind Bergen.

More stars show in the sky now, we pass under the suspension bridge, lights above us disappear and reappear as if by magic. The ship’s engine throbs gently as we slip out of the harbour and along the coast, to meet wide-open sea, accompanied by a large waning moon. 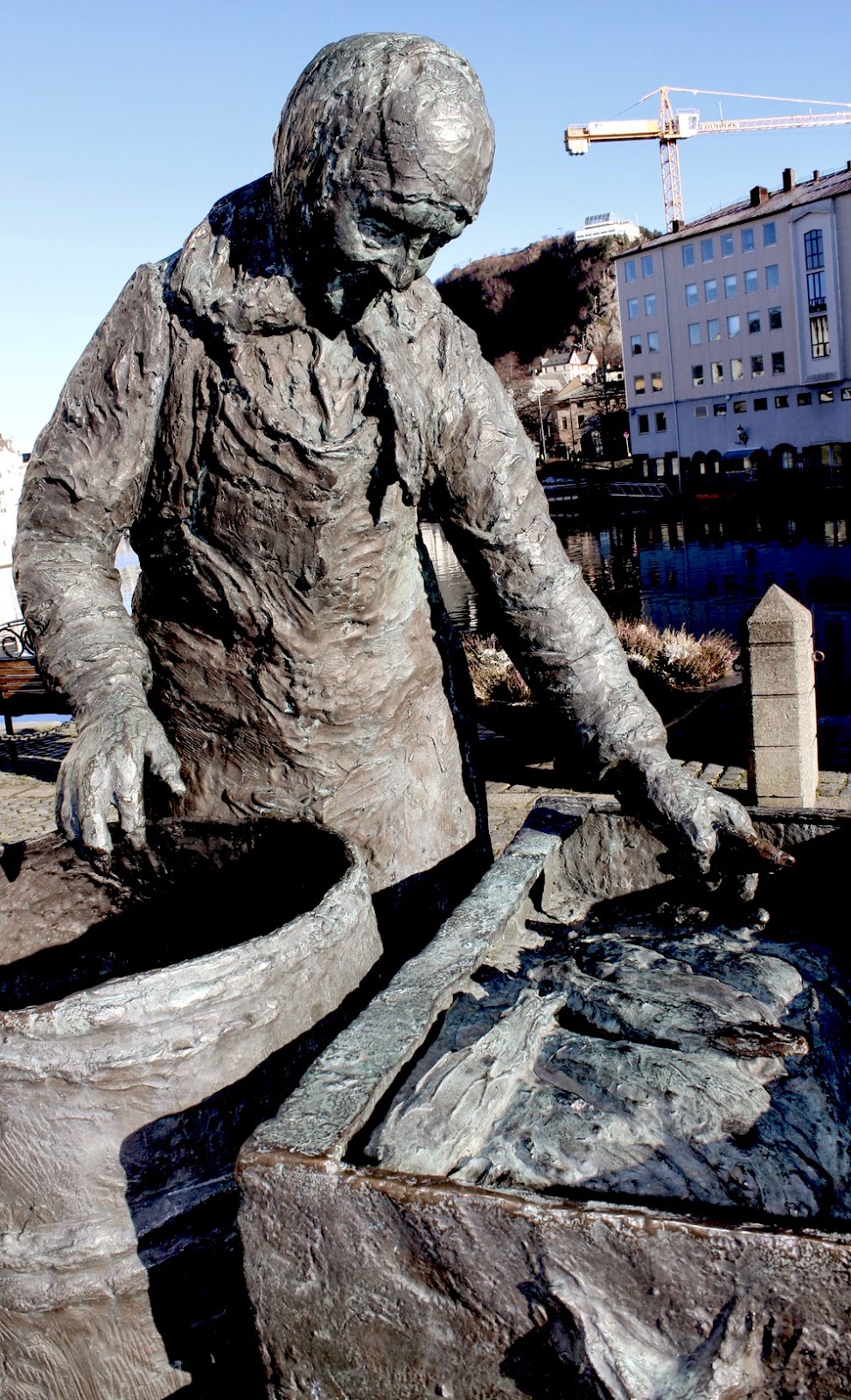 I score of a bottle of Pinot Noir at the Vin Monopoly.


15.00 Heading north from Ålesund, the sun behind us, the sea is still incredibly calm, light travelling softly across its surface. A dark dull greenish hue, gentle undulations cross its surface, no breaking waves to be seen, not even along the shoreline. Either side of the ship lie dark rocky cliff faces, the tops covered with a dusting of snow. Warm in the sun, the temperature is still 0° in the shade.

Occasional announcements in Norwegian, German and English break the silence, the last one advertising a second showing of the Northern lights film. Fine; it means that the decks are devoid of people and I am left to myself to draw. Recharging my Hurtigruten mug with hot-ish coffee I retire to the top deck veranda to watch the landscape slip by under a cloudless blue sky and the occasional flap of a passing seagull. 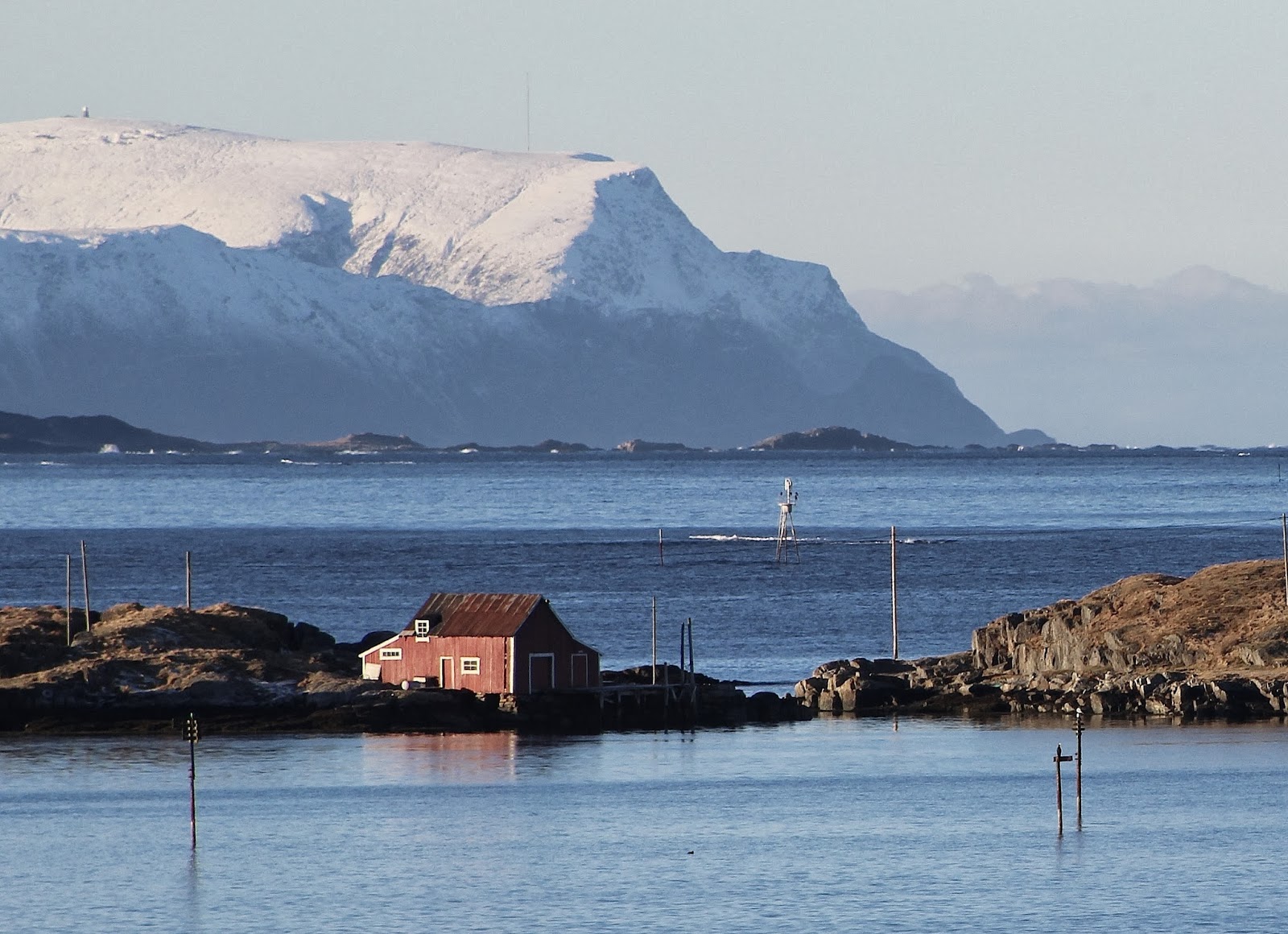 17.30 Molde  62.7564°N, 7.2386°E  3° Light air, 1 m/s from northeast. Scattered houses cluster at the foot of mountains. More snow-covered peaks emerge as we continue north. Despite the constant throb of the ship’s engine and a high-pitched ‘pinking’ sound of rope hitting metal it feels peaceful and unhurried. Scattered settlements become fewer as slopes from mountain to sea increase; snow creeps further down towards the sea. 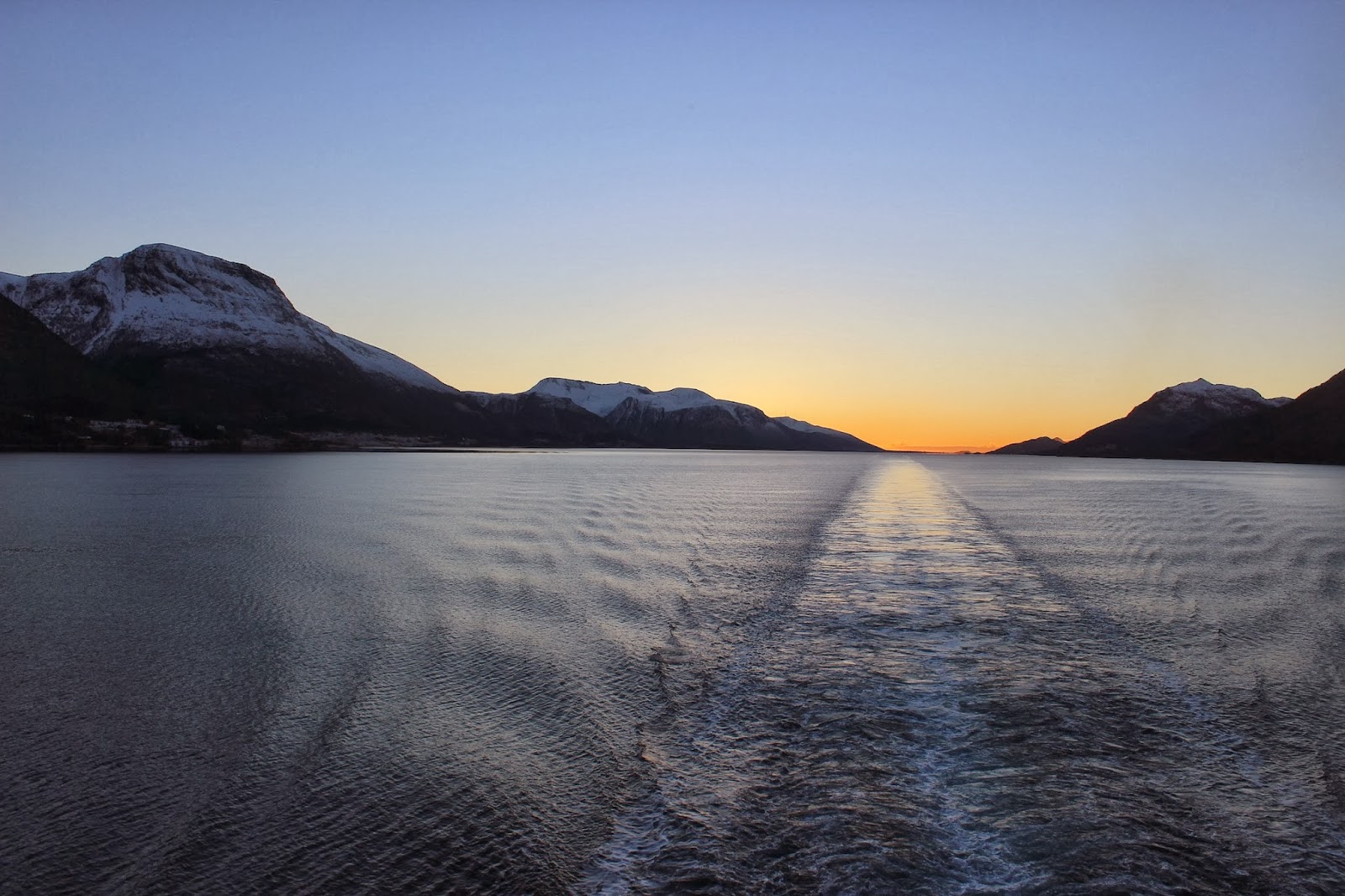 16.45 The sun sinks. A dusting of snow over mountains makes valleys and jagged rocks stand out. Dark-light-dark-light. Watching the sea Its as though we are standing still while the water travels swiftly before us. We creep forward so slowly.
17.00. A lot colder now; the sky turns orange, a line of gold-flecked clouds touch the horizon. A few fellow passengers emerge, pose for a photograph or two, and retreat. Pink/pale orange sun touching mountain peaks; ahead lies a long range of snow-capped mountains, pink glowing.

19.40 Three blasts on the ship’s horn as we pass the southbound Hurtigrute MS Midnatsol, and then head out into the open sea of the Hustadvika.
22.10 Kristiansund 63.1103° N, 7.7278° E  1° A gentle breeze, 4 m/s from northeast. A late night docking, a dark town lies silently below me; little point in disembarking and the stop is a short one anyway. Later, when many of us have curled up in our bunks, a Northern Light sighting is announced; a flurry of activity as passengers donning coats and hats over nightwear, emerge excitedly into the night to stand in the dark and watch flickering lights on the horizon. A hint of green – or perhaps I imagine it. Back to the warmth of my bed. 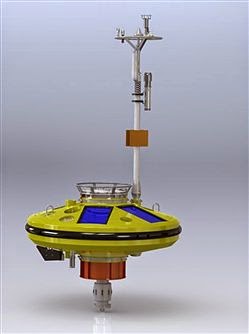 Sunrise 08:01 Sunset 17:04 Moonrise 20:39 Moonset 08:18  06:00–12:00 Light air, 2 m/s from south-southwest  -5°
Trondeim 63.4297°N, 10.3933°E When we awake we've already docked. I leave the ship to meet Harold Krogstad who takes me to meet Stephen Barstow, Senior Ocean Wave Climatologist for Fugro Oceanor, and we spend an enjoyable morning talking waves and being shown round a large workshop full of partly assembled large yellow buoys being equipped with the latest tracking and monitoring equipment.
I peer into the mass of wires and electronic circuits; these state-of-the-art technological artefacts will find their way into seas across the globe, and float or sit on the ocean floor, relaying data, issuing warnings of an impending tsunami or storm bringing rogue waves. One is destined for Japanese waters, another for India.

12:00–18:00 Moderate breeze, 7 m/s from southeast  -1°
Back on ship the wind increases and I spend the afternoon huddled on deck drawing the dramatic coastline, watching passengers staggering past in the wind.
18.15 We cross Folda, an open stretch of sea, the ship rocking in the swell, small waves whipping across the surface.
18:00–00:00 Moderate breeze, 7 m/s from east-southeast -2°

A short stop in Rørvik. Later in the evening while coffee is in full swing there is another Northern Lights sighting and we all bundle out to be met by the wind and stare into the night. There is very little to see on this occasion. Tomorrow we cross the Arctic Circle


Day 4 Friday 21st February
Sunrise 08:00 Sunset 16:33 Moonrise 21:52 Moonset 08:01
7.15am: We crossed the Arctic Circle 66° 33' 39"N. Throwing clothes on over my pyjamas as the announcement came over the ships tannoy, and grabbing camera and sketchbook, I rush outside. A few passengers join me. Black volcanic rock against white ragged peaks - Arctic Mountains - mist rising and falling. The horn sounds three times as we pass the southbound ferry Hurtigrute MS Nordnorge, figures waving - I return their greeting. It feels as though we are entering strange unknown territory; I have never seen so many mountain peaks. I photograph and draw frantically throughout the day until light fades – I can’t get enough if it – can’t get it down on the paper fast enough.

- 4° Strong breeze, 12 m/s from southeast
Midnight 68.346944N 14.998056E. We enter the 26km long narrow strait of Raftsundet. It is a strange experience to stand at the prow of the ship in total blackout, but know that we are moving forwards into a wall of darkness. Snow billows around me as I strain to see into the night. Vague dark shapes of snow-covered mountains close in on us as we travel through the Vest and Ofot Fjords. I can just make out granite volcanic walls and ravines, but it is more the sense of them that I feel. The engines fall silent, the ship seems to hover in the dark space while snow flakes swirls silently around me.

As we travel on through the night a stronger swell rocks us to sleep.

To be continued - images - photographs and sketch book drawings to to be added......